The enduring partnership between Italian icons MOMO and Ferrari again proved successful as the MOMO sponsored trio of Craig Lowndes, Jamie Whincup and Toni Vilander won the Liqui-Moly Bathurst 12 Hour after yet another dramatic conclusion to a Bathurst enduro.

The Maranello Motorsport Ferrari 488 outlasted the most competitive field the race has yet seen to win – but the dramatic final hour of the race once again provided compelling viewing, as a late challenge for victory by the No. 22 Scott Taylor Motorsport Mercedes AMG GT3 came close to victory but ultimately ended in a non-finish.

Defending 12-hour winner Shane van Gisbergen emerged in the lead after the final round of pit stops, narrowly heading Jamie Whincup in the Maranello Ferrari by two seconds.

The pair then staged a thrilling duel for the lead with Whincup putting two wheels on the grass to pass van Gisbergen down Conrod straight before pulling away in front as the race reached its final 45-minutes.

However a late Safety Car within the final 20 minutes re-closed the gap between the pair, only for van Gisbergen to sensationally crash out of the race at the dipper once the race had resumed, denying him, Maro Engel and Craig Baird second place.

Whincup then survived a final safety car interruption in the final 15 minutes before bringing the Ferrari home for the brands second Bathurst victory, backing up their 2014 effort.

“It was quite ironic that me and my teammate Gizzy were fighting for the win right at the end there,” Whincup said of battling his Red Bull HRT teammate for Bathurst victory.

“He was driving like he usually does, all over the place which is good! He’s hard and fair. Certainly enjoyed the battle, there is always a bit of grass action when we’re rubbing panels.”

Added Vilander: “Yeah, you know sometimes you have those days, clear track and just felt really comfortable in the car. Even all the traffic seemed like it was dropping in the right places with the right timing.

“I had clear air with the car and it felt like it was working perfectly. Even the tyres, I never had to go offline. Sometimes when you’re fast feels like it’s easier so today was definitely one of those days.”

Lowndes celebrated his second 12-hour victory, adding to his six wins in the Supercheap Auto Bathurst 1000.

“I did a lot of the morning shift and looked out for the traffic and brought the car home clean until the restart of my final stint.  For me, as Tony said, the car, we rolled it out and didn’t do much with over the course of the couple of days. It was a much nicer car than the 458 over the top of the mountain for both Jamie and I to get familiar with the car.

“We did have a good lead into this weekend and we did have some issues but we rectified that. With Tony putting it on pole yesterday we knew that we had a strong car, we just didn’t know who else was going to be strong for the day.”

Third was the Bentley Team M-Sport No. 17 car driven by Steven Kane, Guy Smith and Oliver Jarvis – Kane and Smith on the Bathurst podium for the second time in two years.

The No. 912 Walkinshaw Racing Porsche driven by Liam Talbot, John Martin and Duvashen Padayachee finished a solid fourth outright – and first in the GT3-AM class – after their higher profile teammates in the No. 911 car were out with damage early in the day.

Defending champions TEKNO Autosports were unable to back up their 2016 success, though a dogged performance from Come Ledogar, Rob Bell and Alvaro Parente saw the No. 1 car score fifth at the finish. The MOMO partnered McLaren 650S GT3’s comeback from three laps down to top 5 finish made for one of the most compelling stories of the race day.

Starting from the back of the field after a last minute engine change on Saturday night, the 650S GT3 had engine dramas early in the race and dropped two laps off the pace.

As usual the race claimed high powered combinations early in the running, 24 cars failing to finish from the 52 starters.

Noted non-finishers included the No. 74 Jamec-Pem Audi, who crashed at the Dipper on lap six, and the Class B Pole sitting Porsche from Grove racing: out after 32 laps after making contact with the wall at Reid Park.

The No. 911 Porsche GT3R of Kevin Estre, Earl Bamber and Laurens Vanthoor had a share of the lead early, however contact with a wall saw broken steering force the car out. 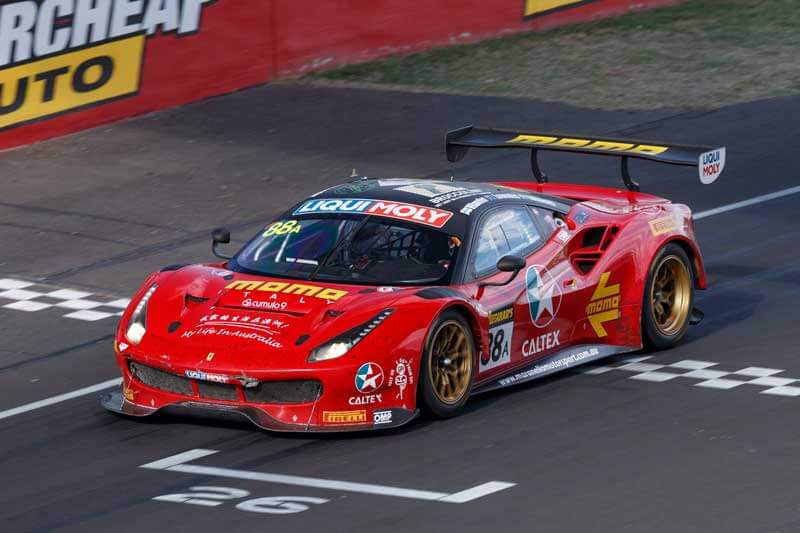 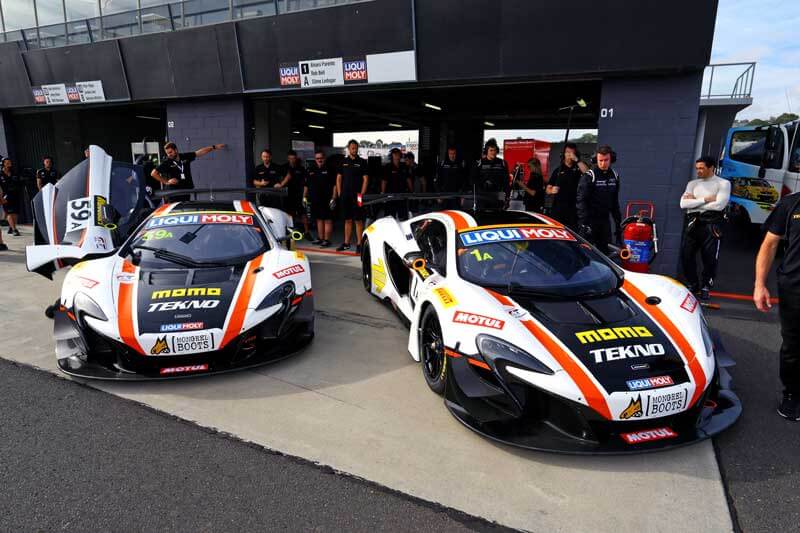 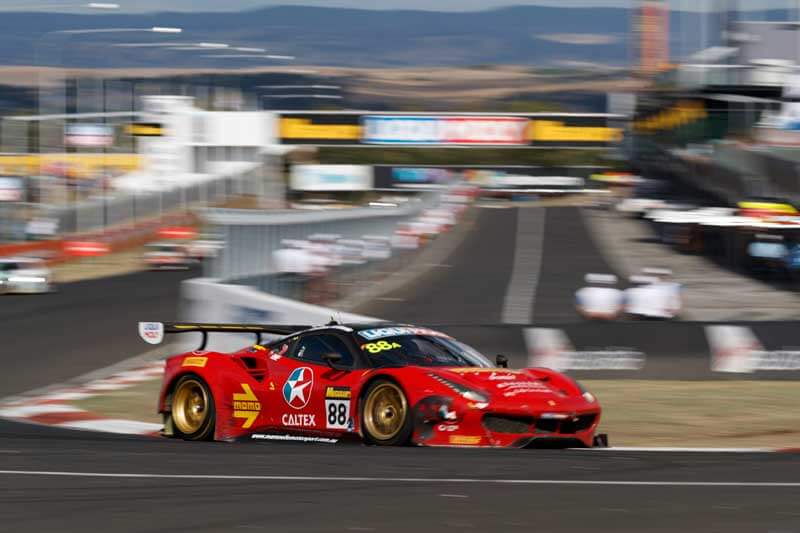 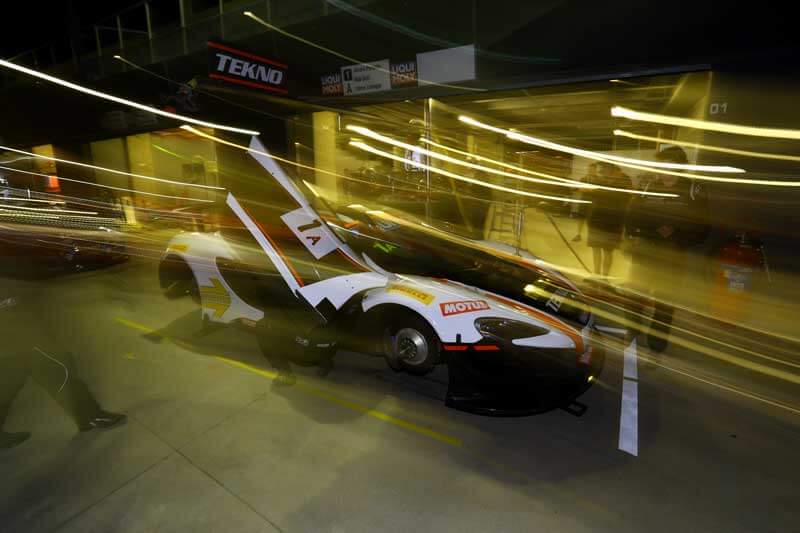 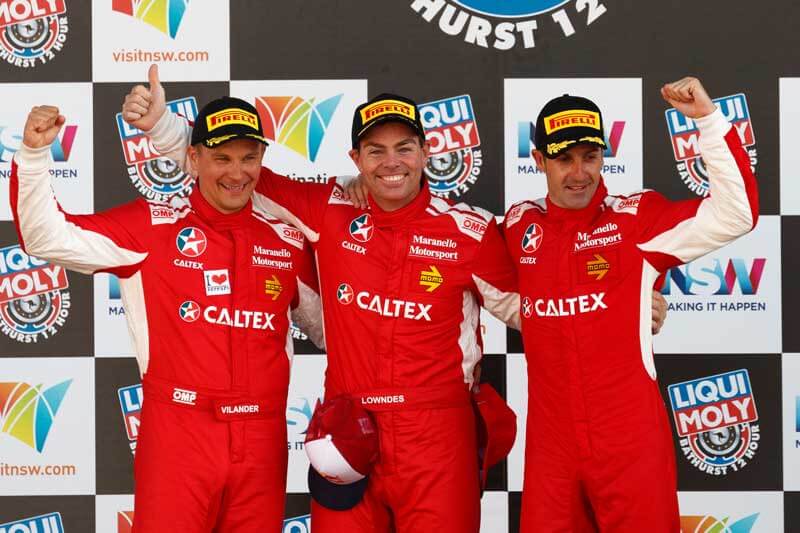 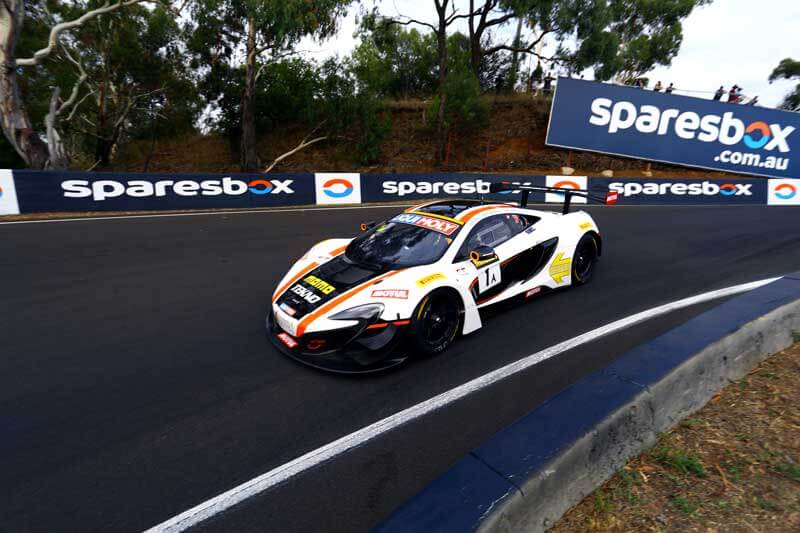